Of course, such statements are meaningless as cars are products of the circumstances under which they’re made and the Trabant is a tough, durable and functional car made from what a relatively unsuccessful state-controlled economy could manage. Average length of ownership in the old DDR (East Germany) was 28 years & used cars were cheaper than new ones (if you had hard cash) as the waiting list for a new Trabi was usually in excess of a decade.

This is one of the best examples you’ll find in the UK, having been completely restored some years ago. These cars have a cult following in the UK and Europe and an active network of enthusiasts and sources for parts. Talking of which, it only has 5 moving parts. It has a 698cc 2 stroke engine and gear-mounted gear lever. It is reliable and easy to maintain.

The body is made of a phenol resin and cotton waste compound called Duroplast as steel was in short supply for consumer products in the DDR and the chassis is likely formed of recycled steel from Soviet T34 tanks.

Despite the car’s reputation as a “spark plug with a roof” it’s actually very reliable and we know that on a freezing day after no use for a few weeks, or even months (we’ve had it a while as the Head Honcho likes it too much) it’ll start on the button. OK, so it smokes like a factory when started due to the mix of petrol and 2 stroke oil on which it runs and it clatters like a metal bolt in a tin can (see video, well take one of our Trabant too when we get the chance) but that’s part of its enduring charm!

It’s a hoot to drive and attracts much attention. It can be used as a daily driver or for shows, advertising and promotional work.

How about this for #retro #car & #caravan enthusiasts? A late #1920s 4.5 ltr #Bentley (we think) hauling what looks like an adapted #railway/#train carriage as a #caravan 😎😍 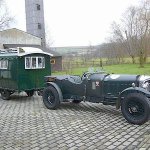 Caught a glimpse in passing of something a bit special in #Southampton today This #van looks like it was made yesterday We think it's a #1960s #Bedford CA No doubt @itsvantime can tell us... 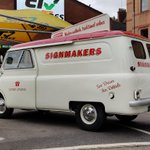