Well you might for a start, you’ve read this far after all so you’ve probably developed a horrified fascination for this frog-like mini pickup truck & you secretly like the idea of a multitude of astonished passers by having to pick their jaws up off the floor as you drive by.

Alternatively, you might have a business to advertise. No-one will ever forget seeing this little Daihatsu. It’s also perfectly serviceable as a very small commercial pickup that can find its way through the tiniest of gaps, turn on a sixpence and park easily.

This car is 100% UK road legal. It has 4 speed manual transmission + reverse. It looks hilarious with its frog eyes, huge spare tyre cover and truck mirrors. Truck mirrors on the tiniest pickup you’ll see!! But they look really great, as do the chrome bars. This, believe it or not, is the top spec version of the Daihatsu Midget 2. These are very few and far between and this example is easily the best we’ve seen.

It’s very reliable, has very nice alloy wheels: they’re actually SSR Speed Star Racing Mk1 3 piece alloy wheels worth £500-£600 alone! Lots of chrome and is just dying to get to this year’s car shows. These little pickups are very rare, especially in the UK. This is a historically important example of a Japanese “Kei” vehicle and will appreciate in value over time if it’s looked after, which won’t be hard to do

It’s also got good provenance as a ‘film car’ having been featured in a mainstream TV programme to be broadcast in 2020.

You can buy the car with the private plate as well for an additional £500. 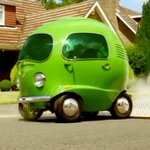 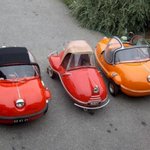